Hello, in this post we will discuss the new GST set off rules which were currently introduced by CBIC.

We will cover the following topics here:

The new CGST Circular No. 98/17/2019 is introduced to reduce the balance under IGST Credits and to optimise the distribution between the Center and the state by the Central Board of Indirect Taxes and Customs (CBIC).

In simple terms, the Rule 88A states that ITC credits of IGST should be first used to pay off liabilities under IGST and the balance credit in IGST can be used for paying CGST and SGST/ UTGST liabilities in any order.

If the order of credit utilization is not optimised, then the business will have a high working capital requirement.

So, it is essential to understand what is the change and its impact on the business sector as a whole.

The two new sections that got added under Section 49 of the CGST Act are:

49B. Notwithstanding anything contained in this Chapter and subject to the provisions of clause (e) and clause (f) of sub-section (5) of section 49, the Government may, on the recommendations of the Council, prescribe the order and manner of utilisation of the input tax credit on account of integrated tax, central tax, State tax or Union territory tax, as the case may be, towards payment of any such tax.

Rule 88A as mentioned in the government circular:

The order maintained before the new amended CGST Law is given below:

The new order after the new amended CGST Law should be:

Hence, a taxpayer must begin with set-off process with ITC of IGST and he should completely utilise it before utilising the ITC of CGST or ITC of SGST. 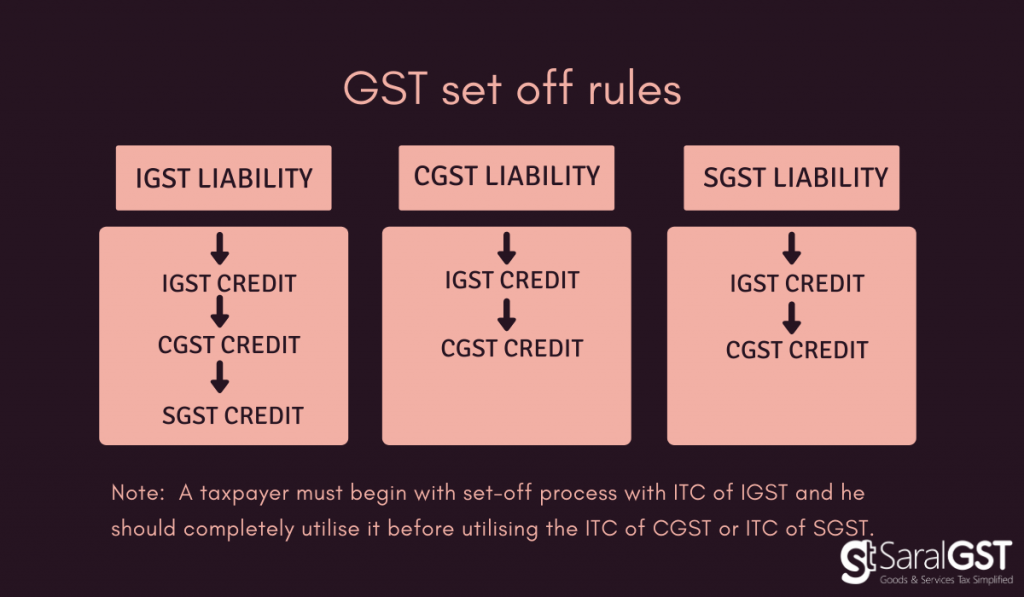 The new GST set off rules gives a clear idea on ITC credit utilisation for each tax head. So, taxpayers can follow the existing facility in the GST portal until Rule 88A of the CGST is implemented.

We have come to an end of this post on GST set off rules. Share your views and queries with us in the comment section below.

Input Tax Credit or ITC – Meaning, Eligibility and how to claim ITC.